Counting cells is an important scientific technique that touches nearly every industry that you can think of on a regular basis.

It's an essential part of both medical diagnosis and treatment, for example, making it critical to the larger principles of life sciences. It also acts as an important sub-category of cytometry, where it is used in the types of research and clinical practices that develop breakthrough techniques to bring higher qualities of care to as many people as possible.

But cell counting is ultimately only as powerful as the equipment you use to perform it — which is why understanding what a hemocytometer is and what it's used for is of the utmost importance.

The Importance of Cell Counting

In truth, there is a wide range of different biological applications that require the precise and specific technique known as cell counting in order to be successful. These include ones in categories like microbiology, cell culture, blood work and more.

At its core, the goal of cell counting is exactly what it sounds like — lab workers and other professionals need to first determine the cell concentration of a sample for the experiment before the experiment itself can begin in earnest.

Cell counting via a hemocytometer is a technique that actually dates all the way back to the 19th century when it was developed by Louis-Charles Malassez - an anatomist from France. He developed the device to assist him in his tasks of performing blood cell counts. This has proven particularly useful for patients with abnormal blood cell counts over the years, as automated counters don't tend to perform very well in those conditions.

However, the applications of cell counting via a hemocytometer don't stop there. They're also used for sperm counts, cell cultures (where the goal is to accurately record cell growth over time), phytoplankton cell counting and more. A hemocytometer is also particularly useful when it comes to the measurement of cell size during a micrograph. Because the width of a hemocytometer slide is known, you can adequately estimate the real size of the cell by scaling it to those known dimensions.

Although the science at the heart of cell counting is inherently complicated, actually using a hemocytometer is a lot more straightforward than most people probably assume it to be.

Most hemocytometers have an "H" shape engraved in the center of the chamber itself. This encompasses two totally separate polished grid surfaces that, when used together, offer a cover slip for the mounting area.

Once the hemocytometer has been prepared, a pipette tip with a sample is carefully placed inside one of the v-shaped wells in the device. The sample is then gently spread out over the surface area. Usually about 10 µl of a special type of liquid is then filled into the area beneath the cover slip — enough so that the mirrored surface is just covered but not overwhelmingly so. Because of the way hemocytometers work, it is possible to load two samples at one time — each using one of the two available grids.

At that point, the fully prepared hemocytometer is loaded into the microscope stage and the counting grid is enabled at low power. After a few minutes have passed and the sample has settled, the counting process can begin. Only those cells that are between the lines on the large square of the hemocytometer are counted, in an effort to avoid counting the same cell twice.

The liquid can be diluted with a number of different substances depending on the ultimate goal of the cell counting. Sometimes people use a different strain of liquid to properly tell the difference between dead cells and viable ones, for example.

At Weber Scientific, we've made it a priority to offer a wide range of different products to help with these goals — with this Hemocytometer for Cell Counting being perhaps the most prominent example. It enables the ASBC Method for microscopic yeast cell counting and features a traditional H-shaped moat form with two counting areas, otherwise known as plateaus. The "V" slash that is built into the design has been added to reduce the possibility of overflow in most applications.

That particular hemocytometer has a cell depth of 0.100 mm +/- 2% (1/10 mm) and a volume of 0.1 Microliter. It offers an improved Neubauer ruling pattern at 1/400 Square mm. Note that on this device, the central square millimeter is ruled into a series of 25 groups of 16 smaller squares, each one separated by a series of triple lines, with the middle on acting as the boundary. Because the ruled surface is approximately 0.10 mm below the cover glass, the volume of each of the 16 smaller squares is just .00025 cubic mm.

Laboratory professionals around the country in need of a hemocytometer buy from Weber Scientific for a very important reason — for decades, we've made it a priority to offer only the highest quality supplies and other equipment available anywhere on the market today. We fully understand how important accuracy is in terms of cell counting — particularly for applications in the food and beverage industry — and we want to guarantee beyond the shadow of a doubt that people have access to the high-quality items they need when they need them the most. 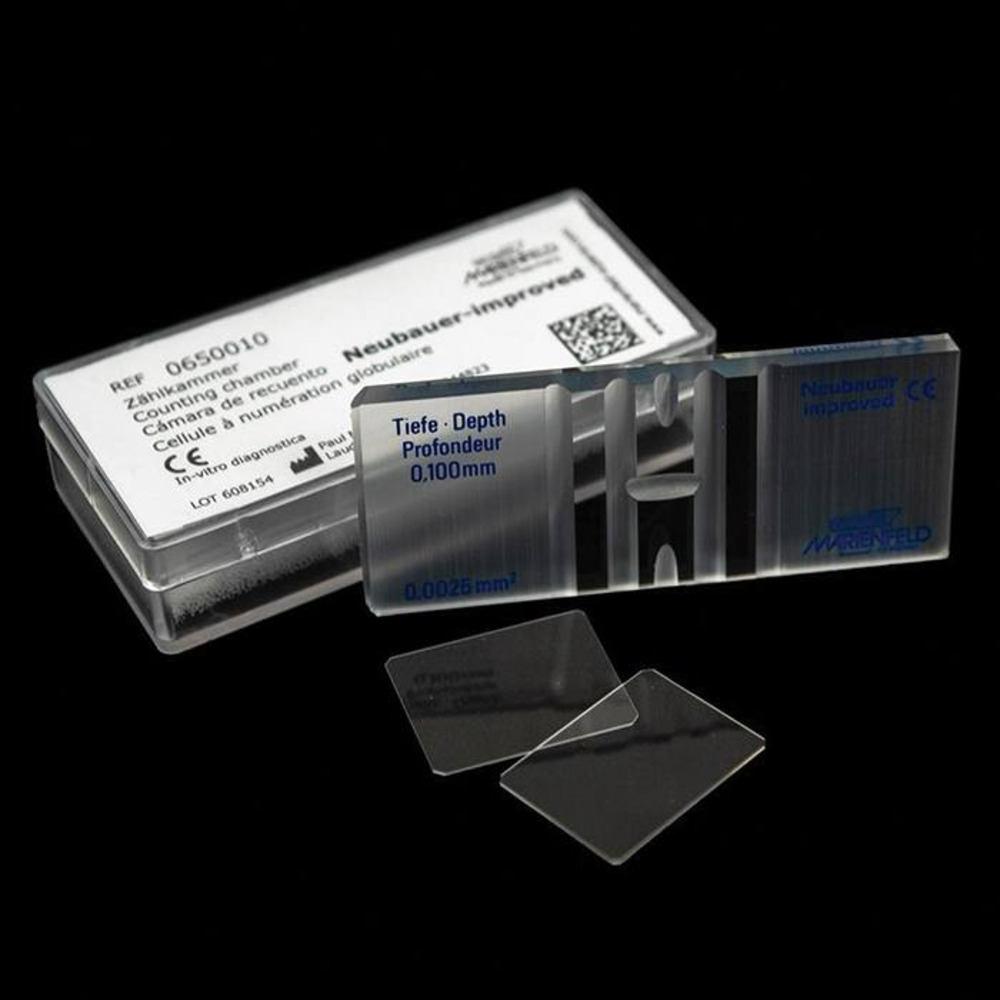 Rulings cover 9 square millimeters. Boundary lines of the Neubauer ruling are the center lines of the groups of three. The central square millimeter is ruled into 25 groups of 16 small squares, each group separated by triple lines, the middle one of which is the boundary. The ruled surface is 0.10mm below the cover glass, so that the volume over each of the 16 small squares is .00025 cubic mm.