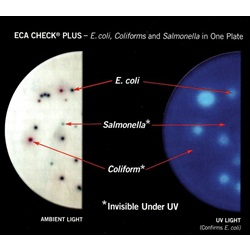 The media was developed and formulated to enhance maximum versatility with clarity, ease of use and interpretation. For normal test samples of many types, they will grow, differentiate, identify and quantify E. coli, other coliforms, Salmonella spp., and Aeromonas spp. while inhibiting gram positive organisms and some other gram negative types.Instructions specify a 24-hour incubation period. In actuality, most samples can be accurately read as early as 18 hours incubation time.Interpretation is as follows (the use of a 10X magnifier will facilitate accurate reading of results):